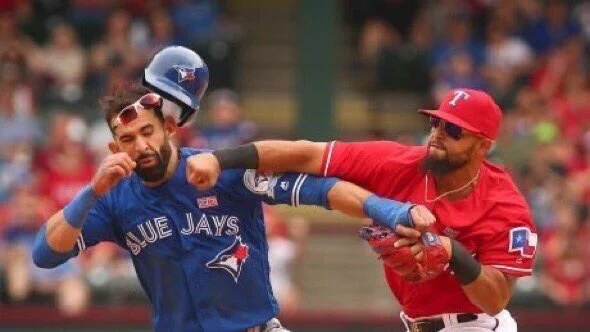 Well, I was in for suprise. As a sports fan, I have seen my fair share of fights. From the Pacers vs Pistons vs fans brawl of 2006, to helmet throwing Connor McGinness of the Tenesse Titans, and the numerous scuffles in hockey and NASCAR.

To give you some back story, the Rangers and Blue Jays have not been the most friendliest of teams for a while. It started late last October when José Bautista flipped his bat after hitting a game ending, season ending for Texas, home run. Well, ever since then, these two teams aren’t real fond of each other.

So fast forward to last night. Texas Pitcher Matt Bush, who spent much of last season in prison on a DUI conviction, threw a fast pitch at Bautista that hit his ribs instead of bat.

First off, Bush was behind bars when Bautista flipped his bat at last year’s game. So assumingly someone told Bush to hit Bautista with the ball. Either way, lets continue.

Bautista slides his way to second base, seemingly trying to take Rougned Odor’s legs out in retaliation for the rib hit. Odor wasn’t too happy about that.

By this time I was off my couch screaming.

Benches cleared and punches were thrown, only these didn’t connect.

Suspensions will be coming soon I guess. But I got to give it to Bautista, he didn’t fall flat on the ground after Odor connected with a right hook. Clearly Odor, still has some boxing skills from his old home in Venezuela.

Bautista took it in stride, commenting in the post game interview, that “I got to give it to him, I didn’t see it coming. I guess it will take a bigger man to knock me down.” Yeah Bautista way to recover after getting sucker punched on national television. Good job.

After last night’s malay, sports fans have another fight to add to the already exhaustive list.

Will I watch baseball again, possibly, I am also sure that this isn’t the last time there will be a bench clearing brawl or straight up MMA fight at a baseball game or any other sports venue.

So enjoy the replays and memes from last night’s mess, because we will be seeing them for the next month 😂.